In the Whole Wild World!

SMARTER THAN THE AVERAGE BEER

Lots of stores have a beer cave, but only Lowes Foods has The Beer Den where you'll find the finest selection of crafts and drafts in the whole wild world. Our selection is fantastically varied, local, and delicious. We have seasonal offerings of unique beers on tap with Growlers filled on site for you to take home and enjoy. From IPAs and ESBs to porters, stouts and pilsners, The Beer Den has something for even the fiercest craft beer aficionados.

Sneak out into the wild and see if you can discover something new. Get lost among exotic species of white-tailed deer, or stumble upon a brood of cubs waiting to pounce. One thing is for sure, once you have entered The Beer Den, you will never settle for a boring beer cave again.

The Legend Of The Beer

Long ago, sometime around 1850, Joe Furgeson, my great-great uncle reported sighting an unusual creature that, as far as I know, no one else has ever seen. Joe was at the family hunting cabin in the woods of North Carolina. It was autumn, the leaves were bright yellow and red, and the sun was setting earlier each day. Joe hadn't had much success hunting. He usually didn't have much success. Most folks figured that Joe just enjoyed the quiet time in the woods and didn't really hunt. They were probably right 'cause if Joe had been hunting he would have had a gun and we would know for sure what he saw in the woods. But, this is all we know.

Shortly after dusk, Joe heard a rustle in the woods. He turned, and saw something he couldn't believe. It had the dark fur of a bear, 5 times the size of the usual Kodiak bear, almost as big as an elephant. That would be enough to make a man run for the cabin and lock the door, but Joe couldn't move. He knew from all of his time in the woods that even the biggest bears were nearly silent when they moved. This giant was making all sorts of racket that just didn't make sense. Then Joe realized that the bear had enormous antlers-- 22 points at least. The antlers were getting caught in the branches, causing the noise. Joe was frozen. He couldn't move as his eyes met the eyes of the struggling beast. He wanted to help free this strange creature but his survival instinct kicked in and he made a run for the cabin.

The next morning Joe went back to town and told everyone about his encounter with the enormous half-bear, half-deer. Joe called the creature a Beer. Some guys went out to the Furgusen cabin to see the Beer. Some reported seeing giant footprints. Some said they just saw lots of beer bottles. Much like the people who say they've seen the Loch Ness Monster or Big Foot or Yeti, Joe could never stop thinking about the Beer. He and the few friends who believed him went on one Beer hunting expedition after another: never with any luck. Each generation of my family has carried on the tradition. I may never see a Beer but I'll never miss a chance to go Beer hunting. In honor of uncle Joe, we created the Beer Den where anyone, whether you believe or not, can find the greatest beers in the whole wild world. 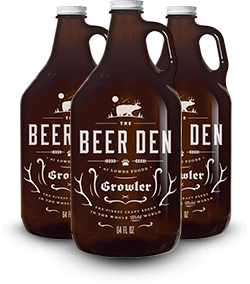 so, what exactly is a growler?

The Beer Den Growler is a 32-ounce or 64-ounce (one half gallon) glass jug that we fill with beer fresh-to-order right here at Lowes Foods (only available in certain stores...for now). We charge a small $4.99 fee for each Growler — but just bring the empty back next time and we only charge you for the suds. Cheers!

"The Beer Den makes Lowes Foods more than just a grocery store. It creates a fun and unique experience that makes grocery shopping feel like anything but an errand. The Beer Den and Lowes Foods will forever be my go-to stop to sip ‘n shop."

"Lowes Foods takes the Beer Den a step further by not only having a robust craft selection for the beer lover like myself but they ‘tip their hat’ to local breweries. The overall feel of the Beer Den is inviting, turning it into a destination. Who knew the husband would start to volunteer to do the grocery shopping?"

"Not only is Lowes Foods an amazing place to find fresh produce & groceries, but the "Beer Den" is an awesome place to unwind & try several beers. They are sure to have a beer (s) you will love with their amazing craft selection on tap! Grab a beer & shop, or grab one, sit down & talk with a neighbor. You'll be sure to have a fun time!"